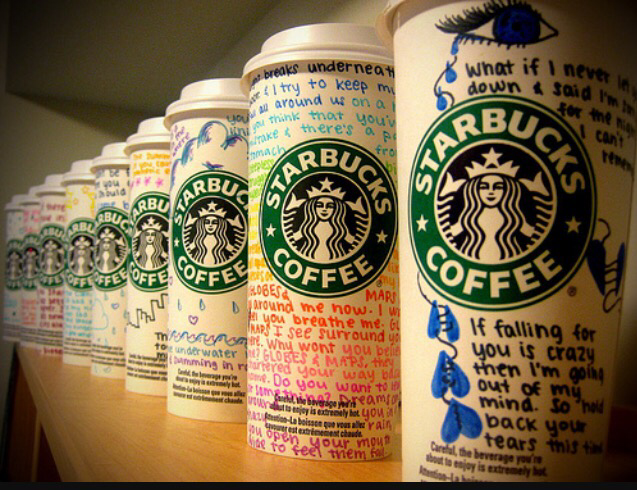 You might have heard of the new Starbuck’s Christmas Policy. Here’s my take on it:
As Christians, We need to refocus; when the concern of a Company’s Declaration of Faith is emphasized greater than the Church’s representation of Christ, we need to refocus our attention. We live in a world where the Lord is constantly denounced and disrespected by so many. None of us can comprehend His majesty or magnificence. He is due respect, but what should speak greater volumes isn’t the insignia on a coffee cup, but rather a heart recklessly on fire for Him.
I look at it this way, many Christians have tasted and seen that the Lord is good. They’ve been to church, they’ve said their prayers, etc. But more than that, I believe God wants His people to be more than just churchgoers, more than just prayer-sayers. He wants us to be On Fire For Him. He wants us to be motivated to be ambassadors of Christ, as we’ve been called to be.
In the context of Starbucks, many Christians can be compared to that of a Cup of Coffee. Some Christians are a Cold Cup of Coffee, they have lost their heat or their fire due to gossip, drama, discontent, and many other factors, thus their heat needs to be Revived.
Some Christians are what can be considered as a Lukewarm Cup of Coffee, where at once they were fired up about serving the Lord and discovering their purpose, but due to priority shifts, complacency, worry, compromise, boredom, etc, they have grown to be in a stale state. They are neither hot nor cold, and have forgotten their sense of purpose. Thus, they need their heat to be Revived as well.
And then there are Christians whose lives dare to speak louder than any Starbucks Coffee Cup ever could. These Christians represent the Hot Cup of Coffee. Through prayer, prioritizing Christ first, reading the Word, living out their purpose, and striving to be like Christ, they are doing what they are meant to do and being the ambassadors of Christ they were destined to be. Their lives are so on fire for God, that their witness is stronger than anything else. They are functional for they are being Hot, living in the state that God called them to be in. They are so full with the love of God, that their cup runs over with an abundance of joy, care, forgiveness, and more! Their life says so much that it speaks to others without them ever even saying a word. But no heat can be continued without the fuel of faith that we all can use more of. As Christians we all need our faith to be refueled and our heat to be Revived.
Question: If you were to examine your life, what cup of coffee would represent you?
As a Christian, I struggle all the time at being On Fire for God. Heat requires effort, determination, and a non-stop pursuit of seeking the Lord. Tonight these thoughts are speaking to me, because I know that I have plenty of room to grow in my faith. I’m so thankful that my salvation isn’t defined by the label on a cup of Starbucks Coffee, but by the love of our Savior, Jesus Christ. Starbucks might give me energy from time to time, but it’s Jesus who has given me life, and life more abundantly.

#BrewingThoughtsAboutaCoffeeShop
“You prepare a table before me in the presence of my enemies; You anoint my head with oil; my Cup overflows. Only goodness and faithful love will pursue me all the days of my life, and I will dwell in the house of the LORD as long as I live.” -Psalm 23:5-6