DEDICATED to my friend who is a Royals fan and is going through a lot. This post is for you 🙂

Last night, like many of you, I was on my phone when the news notification came in that the Kansas City Royals had won the 2015 World Series after a 30 year drought. The sporting event had taken social media by storm highlighted by many fans expressing their excitement. Congrats to the Royals on a well-deserved championship! I’ll be honest, I love to watch sports of almost any kind, rodeo, basketball, college football, underwater basket weaving(just kidding) and especially baseball, after all its an American tradition.

Although I’m noticeably one of the most athletically UN-coordinated people you’ll ever meet, following sports is one of my favorite hobbies, which I believe I’ll be partaking in for a very long time. 🙂 My reasons aren’t uncommon for having an affinity for sports, I love the thrills, the Cinderella stories, tailgates, bowl games, trick plays, the stats, and jaw-dropping catches, hits, and of course, the ESPN SportsCenter TOP 10 reel which leaves spectators speechless. Even though the category of sports has been deemed as an entertainment value by many in our society, I do believe there is something very special that stems from the world of sports. Life lessons that we all can learn from. And, with the recent Kansas City Royals World Series win still fresh on our minds, there is an underlying lesson which we can definitely learn from.

Spirit, we see it all different shapes and sizes. Its the combination of our character and emotions. Our will wrapped up in a unique personality. Our strength embodied within a single being. Spirit is the invisible makeup of our lives. We feel spirit when we exchange emotions with one another. We sense it in a song a singer is singing. We notice it when a WWII Vet is telling us a story of his tour. We see it when someone overcomes obstacles, heartache, and achieves a determined goal. I’ve even seen it in a hospital, when the doctors say there’s nothing they can do, and through thick and thin, their circumstances are overcome, because the patient’s spirit is stronger than their symptoms.

Many say that if you were to look back in 2006 at the Symptoms surrounding the Kansas City Royals baseball franchise, you would have found a team that was at the time, one of the worst teams in Major League Baseball. The drought had been a long time, stemming from 1985 when the team won its last championship. But in 2006, when Kansas City got their new manager, they knew work would need to be done. Year after year, the team began to grow, and memorably the 2014 season is one where the growth was evident and left the team hungry for more. And finally, the dream of a World Series Championship was attained where the symptoms where defied and victory had been defined. This team is historic because they chose to not let their history of struggles to define the destiny, instead, it was a motivational factor that spurred them on to the win column. Through their courage and spirit they chose to defy there current drought and add a crown to go nicely with their Royals attire. They ramped up a franchise and energized a fan base, where newspapers are now saying “Kansas City is a Baseball City Again.” When you allow your spirit of strength to empower your future, people will take notice, and previous labels will be broken. 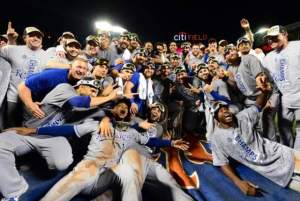 The life lesson of this sports story is that no matter your circumstances, no matter your drought, no matter what you are going through, these things don’t have to define your destiny. For these things shall pass and your life, regardless of how many wins or losses you’ve stacked up or how long you’ve been craving for a win, has a very special calling on it that goes well beyond the perspective of the championship field of a World Series Game. Your calling, your purpose is waiting for your unwavering spirit to come alive and defy the negative odds in your own life. The symptoms of sickness, depravity, grief, anger, loss, depression, anxiety, stress, or whatever you are facing, may have a strong effect on you right now, but your circumstance, past or present, DOESN’T HAVE to DEFINE YOUR DESTINY. Live with this life lesson: What’s inside of you is greater than the negative things that surround you.

This Tuesday, in Kansas City, radio stations have been announcing that one of the biggest parades and celebrations the city has ever seen will be held. People will be basking in the reality that the Kansas City Royals chose to Never Give Up, they chose to Never Back Down, and most importantly, they found that their unwavering spirit was stronger than the symptoms of their circumstance.

Tonight, you might feel like you are at the bottom, when in truth, you are just a mindset away from being at the top. Challenge yourself to look past your past, to look beyond your current anguish, and to begin to see yourself as a champion who is meant to succeed, overcome, and be victorious. Let the strength that others see in your eyes begin to come forth. Be strong. Be steadfast. Most of all, let your spirit take flight to where you won’t just be making a base hit in a ball game, but a Grand Slam in this crazy game we call life. 🙂

“But you are a chosen people, a Royal priesthood, a holy nation, God’s special possession, that you may declare the praises of him who called you out of darkness into his wonderful light.”
-1 Peter 2:9