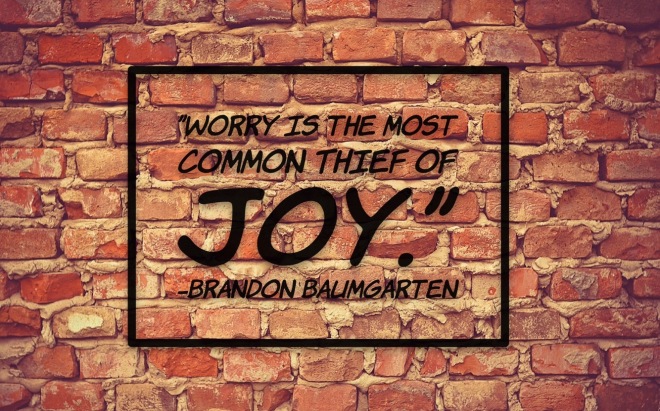 Worry is the Most Common Thief of Joy.
A statistic done in the U.K. found that the average person spends approximately 5 years of their lives Worrying about something. Yep, you read that right. 5 YEARS….
We worry about so much in life. Some of us worry about every single facet as evidenced by the many fingernails we bite. However, worrying has a huge effect on how we operate and function too.
I once had a gentlemen reach out to me awhile back about asking me to coach him on interviewing skills for this dream job he was applying for. When I met with him for our first session, he was already worried about the application & interview process. So worried he began to question his qualifications, resume, and work ethic so much that he almost talked himself out of even applying for the job. After trying to encourage him, he finally let go of his world of worry and began to focus on getting the job.
Fast forward a few weeks later, I followed up with him, he did in fact get his dream job. He was so excited about it and woke up every morning joyfully to live out his passion. However, worry sat in again, as his dream job started, he began to worry about his calendar, his salary, his networking skills, and his career longevity. His worry gets out of control, as he worries even more about matters that don’t even pertain to him. Soon he finds himself consumed in excess stress surrounded by a mountain of anxiety, and eventually, a disdain for the very job he once dreamed of doing. All because he couldn’t Wear Off His Worry.
Worry is the Most Common Thief of Joy.
Does this story relate to you? I know it relates to me, because Worry is something I’ve struggled with in the past. You see when we allow what worries us to steal our focus it will soon steal our joy. Worries no longer become worst case scenarios, but constant what ifs that cloud our minds and impact our judgement. If not handled correctly, worry will control you, it will rob you, and it can even dictate the way you live. Have you wore off your worry yet? If not, we’ll soon see just how fast 5 years can go by. #WearOffWorry #LeadershipPost #Matthew6:34