Why is the Red Dirt of Oklahoma Red? Although there are many defining characteristics of Oklahoma, such as the excitement of watching an OKC Thunder basketball game to sitting on your porch while watching the sunset fade into the night with the silhouette of oil derricks, windmills, and grain silos outlining the beauty of the evening, the presence of Red Dirt joins the list as one of those defining characteristics that no tourist nor local folk can ignore. It’s a huge part of who we are in Oklahoma.

Whenever my grandparents would visit from up north, they would always fill a cup full of red dirt and then take back with them to show their northern friends how unique this state really was. Researchers point out that one reason why Oklahoma is one of the few states to contain this specially colored soil is because unlike many places we have a high content of iron under the ground. These iron properties affect the phenotype of our soil from being black to red. Pretty cool, isn’t it?
Red Dirt has affected more than just our dirt. It’s been used to craft different types of red-dirt pottery, red-dirt colored shirts, and even inspired our musicians to create a new genre of music called Red Dirt Country. Yes, I am talking to you Wade Bowen, Eli Young Band, Casey Donahew, & Josh Abbott fans. You know you are 😉
However, today, as we remember Holy Week and in particularly, the day of Good Friday, I can’t help but think of how over 2,000 years ago, there was also Red Dirt not only in what would become the state of Oklahoma, but there was also Red Dirt in the land of Israel.
On this day, an uncommon man named Jesus was beaten, betrayed, belittled, and bruised. They would falsely accuse, unjustly try and ultimately, wrongly condemn him to die on a cross. The Roman Guards began to scourge Jesus as they whipped him with a specially mechanized weapon that would tear out His flesh and blood with every stroke.
As this activity commenced, His blood began to pour and release from his body so fast. After scourging him, they put a crown of sharply pointed thorns on his head, that would pierce his skin. They then made Jesus carry a cross on his back for over 2 miles. I can only imagine the trail of blood that Jesus left behind on that long journey to his execution. With each drop of blood dropping from his body and onto the ground. After making his way to the hill where he would die, the soldiers would nail him to a cross. A nail in both of his hands and at the base of his feet.
The Bible says that after Jesus’s final breath, a soldier pierced His side and out from his side, blood and water flowed. I believe that even though the dirt isn’t red in Israel, if you were to look that day at the foot of the cross where Jesus died at, you would see Dirt that was Red with the Precious Blood of Jesus Christ. When the dirt turned red, it signified Jesus believed in us, He believed in our unshakeable purpose, value, and meaning so much that He was willing to give it all so that we might have everlasting life. With each drop of blood He spilled onto the ground, He said, “I Love You.” “I Believe In You.” “No Matter What You Do, No Matter What Mistake, Sin, or Wrong You do, I will ALWAYS Love You, and because of this, I will Give My Life For You.” This Dirt in Israel turned Red not because it had a High Content of Iron, it turned Red because it was Touched By a High Content of Love. 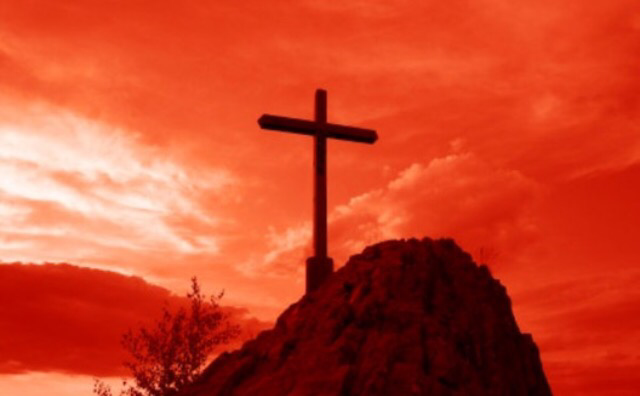