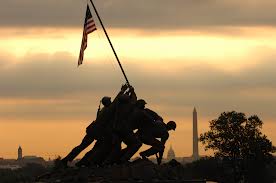 Arlington, it’s one of the biggest cemeteries in the world, not to mention one of the most moving. It’s known as the final resting place for nearly 300,000 service men and counting. It is where the price of our freedom is perhaps the most obvious. The graves are well marked, the markers standing as if to create the final military formation. The lines perfect in every direction. However, Arlington is more than just a cemetery; it’s a hallowed ground, honoring the many men and women who have given their lives for the sake of their country.
Within the business of life, it’s easy to take our freedom for granted, but to a schoolteacher named Martha Cathren it’s a priority. On the first day of school at Joe .T. Robinson High in Little Rock, AR, students walked into Mrs. Cathren’s classroom expecting a typical first day of school. But to their surprise they found Mrs. Cathren’s classroom empty, not one desk in sight. One puzzled student asked, “Mrs. Cathren, where are the desks?” Mrs. Cathren replied and said, “You get a desk if you can tell how you can earn it.” One student said, “Mrs. Cathren, is it by making good grades that we get a desk in your class?” Mrs. Cathren replied saying, “You ought to make good grades in my class, but that won’t earn you a desk in my class?”
Another student said, “Is it by being on our best behavior in your class?” Mrs. Cathren then said, “You will behave in my class, but that won’t earn you a desk either!” All day long class after class kept asking, but no one could come up with the right answer, at the end of school, Mrs. Cathren invited all of her students into her classroom and said, “Since no one has been able to figure it out, I’ll tell you.” Martha opened the door of her classroom and in walked 27 veterans, some wearing uniforms from years gone by, but each one carrying a school desk.
As they carefully and quietly arranged the desks in neat rows, Martha said, “You don’t have to earn your desk…because these brave men already did. They along with thousands of others went halfway around the world, giving up their education and interrupting their careers, so we could have the freedom we have today. No one charged you for your desk, but it wasn’t really free. These men bought it for you.
My friends, the greatest lesson we can ever learn is the principle of Living to Serve. The next time you’re looking for an example of this lesson, think about Gettysburg, think about Vietnam, think about Arlington, but most of all, think about your desk and the price it cost. Just remember, that while All gave some, some gave All.